The Land of the Housemaids

There is a love/hate relationship that goes on with the housemaids in the UAE. I first became acquainted with housemaids while at my husband’s bosses house. Their housemaid, a 30-ish Filipina woman who has been with their family for over 3 years was sweet, polite, and an excellent hostess. Helen was everything I wanted in a woman and it was right then and there that I determined to find my own. Since I hadn’t made many friends yet I didn’t have the benefit of their housemaid experience so I was sailing in uncharted territory. I just knew I wanted my own Helen. Someone to serve food on toothpicks, clean up and smile like she loves her job and my child as if it came from her own womb. I ran an ad on the online site Expat Women. It was overly flowery making us look like the perfect American family complete with a golden retriever and a handsome boy (with a foul potty mouth, but non-the-less, handsome). It was the perfect ad that would entice any housemaid to want to move in with us. Only one small problem, depending upon a housemaid’s nationality they may not be able to read so all of my perfection was pointless until one American man happened to stumble upon my ad. As it turns out, this man needed to rehouse his housemaid because, I was told, whether it was true or not, that his wife unexpectedly became pregnant and the current housemaid did not want to deal with a new baby. So I invited the housemaid to an interview.

She arrived at the Westin with a lime green shirt that read “I love Abu Dhabi” red stretch pants and red lipstick. I almost put her back in the cab because the combination was painful to look at but I realized that was far too judgmental of me. We sat down in the lobby and she began telling me with an Indian accent that was difficult to understand, that she was looking for a Western family and that she was an excellent cook, an excellent cleaner, and a very responsible person. She said that she became a housemaid at the age of 13 and worked for an English family for 8 years and they sent her to cooking school, taught her how to run a proper house, and how to garden. The next night she cooked our dinner and brought it to our hotel room. We took one bite and decided to hire her. Joti obviously knew her business. She helped us move into our new villa and it was obvious from the start that Joti was a career housemaid and she did it with an enormous amount of pride. I didn’t have to tell her how, when, or where — she read my mind and got things done. The only thing Joti asked from us was to give her a month off in January to take care of her ailing father. “No problem!” we said.

In hindsight, I guess maybe it was problem but at the time my mind was thinking all Ghandi and Mother Teresa instead of thinking The Great Escape. My friend Maha, with her Lebanese accent says, “I will never hire another housemaid again!” Apparently, the last housemaid Maha hired was from Ethiopia and suddenly became possessed by some sort of strange demons and began having demonic seizures in Maha’s house and yard. Prior to the possession seizures she started loafing around the house claiming to be sick while Maha was left to nurse her back to health so she could resume the duties she was hired to do. Eventually, Maha became tired of playing nursemaid to her housemaid and cancelled her visa. As they took her to the airport to send her back to Africa, the housemaid started slapping herself while screaming “They abuse me!” Everyone stood there staring at the housemaid throwing herself on the airport carpet as she attracted a crowd and scared Maha’s children. This alerted the Abu Dhabi police to intervene as the housemaid screamed at the top of lungs, “No money, no food, they are hitting me. Allah, Mohammed help me!” Maha in her Lebanese accent says, “She used to sit, watch TV, and eat all day. Not even one hour of work a day. When we went out, she only ordered the Ribeye and the shrimps. One day she woke up and I swear she was possessed… Screaming Allah in the backyard and making cou-cou and ouah-ouah sounds…. the next day it got louder. I knew I had to send her back when she put a white towel on her head and started walking like a mummy. It was FREAKY!” 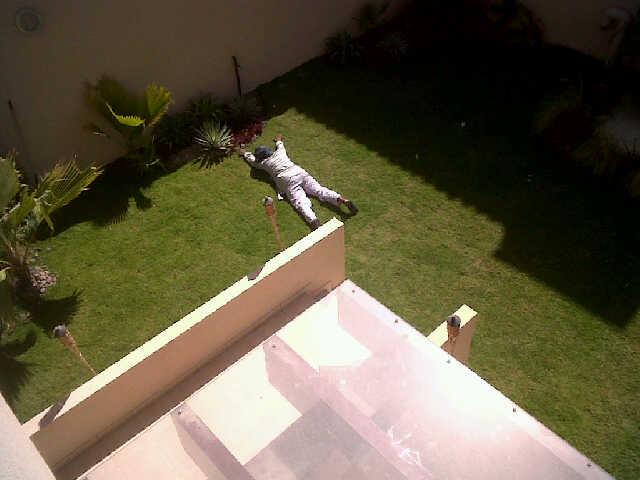 And then my South African friend Elize added to the story, “Oh, Gina! You wouldn’t believe the things the housemaids do. We found out one of our housemaids was sneaking out and turning tricks at night. My husband caught her hiding underneath his car. He had to pull her out by her feet and call the police. Another one of our housemaids ran away while we were in Italy. We had just arrived and I planned a cathedral tour for us on the next day. When we woke the next morning and walked the baby over to her room she was gone. We arrived at the hotel at 8:00pm and the hotel security camera showed her leaving the hotel and getting into a car in front at 9:00pm. Apparently, she had made plans for her escape prior to our arrival.” My Liberian friend Wlede says, “Everybody knows you don’t take a housemaid to the USA because as soon as her feet hit the soil there is a welcome committee there to whisk her away.” And another friend Brenda says, “I have to tell Mary Anne all the time to use her inside voice. Her high pitched, overly excited voice drives me bananas! She asked if her boyfriend could stay over from time to time but we said, absolutely not. She can do the wild thing somewhere else — not in my villa!”

The housemaid saga is never-ending. Stayed tuned for “Where is Joti?”