It wasn’t long after losing the election when I was asked to chair the school’s Thanksgiving celebration committee. “Sure,” I said. “Who should I report to? Does the school have someone who coordinates the events?” And with that one little question, I came full circle. After losing the election by two votes I was appointed to the executive board of the Abu Dhabi PTA by the mere fact that nobody wanted to tackle the crazy job of organizing parties for 800 screaming children and their families. I had been in the Middle East approximately 1 1/2 months and I was throwing a dinner party for 1600 of my new BFFs. That week we kicked off the Thanksgiving committee with about twelve people in attendance. My agenda included the venue, the theme, the decorations, the donations, and of course, the menu. I was so wrapped up in the planning process that I failed to recognize the look of confusion on the faces of some of the attendees.

“Okay, let’s rewind the meeting and start from the beginning.”

A turkey is a large bird that Americans typically serve for Thanksgiving. And Thanksgiving is a national holiday which celebrates thanks and community togetherness. It signifies the time before the settlers (now known as Americans) raped, pillaged, and spread sexually transmitted diseases to the local people.” I hope this helps clarify things for everyone. Now, let’s get busy organizing this very important event in American history. “Has anyone ever heard of a sweet potato?” 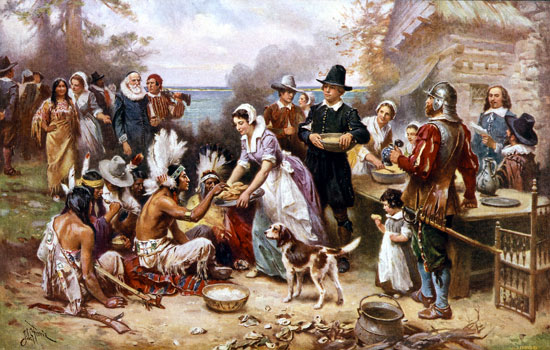 Planning the Thanksgiving celebration is a good analogy for the extra layer of difficulty that exists when living in the Middle East. Communication and cultural differences, although many speak English, is always a struggle. Just when you think everyone is on the same page the waitress serves a dish that you did not order, the dry cleaning you thought was ready on Wednesday will be ready on Friday, the BBQ grill that is being delivered to your house is accidentally in another part of town and although these mishaps occur regularly they are always followed up with a universal no problem because regardless of what happens accidentally it is typically— no problem. It will be fixed, remedied, repaired and delivered with a smile (usually).

For example, my friend Wlede went shopping with us two days before Thanksgiving in the ram-shacked plaza known simply as “The Pink Shops” (they are not really pink. not sure. don’t ask.) and she was carrying around the cushion to her dining room chair which she intended to get reupholstered before Thanksgiving. The idea that she was going to find fabric that matched, have it reupholstered and delivered to her home two days before Thanksgiving, boggled my mind. As it turned out, not only did this occur but the fabric didn’t match to her satisfaction (another story entirely because Wlede is a little bit of a diva) so they took it back, got new fabric and resewed it and delivered it again — in one day. And the whole thing, delivery and all cost less than $20 US dollars. This is the kind of stuff that does not happen in America.

Yes, regardless of where you live there are pros and there are cons. This is definitely a pro. The con would be I am shopping at a Pink Shop that isn’t really pink and it looks like it could collapse at any minute. Actually, it looks like one of those buildings on the news when they show footage of war torn countries. That’s definitely a con. Pro for America is at this time last year I was shopping at Scottsdale’s Fashion Square.